Make a batch of delicious dairy free Anzac biscuits this Anzac Day. These iconic biscuits are easy to adapt to cater to many allergies with just a few simple substitutions that don’t detract from the well-known recipe.

*Disclosure: This post contains affiliate links. We may be paid a commission if you use these links to make a purchase. As an Amazon Associate we earn from qualifying purchases.

What are ANZAC biscuits?

How did we end up with a biscuit named for the Anzacs? According to the Australian War Memorial website, original Anzac wafers were army biscuits with a long shelf life made as a bread substitute for the soldiers. Soldiers would sometimes grind up these very hard wafers to make a porridge instead of eating them as a biscuit tile.

The popular Anzac biscuit we all know and love today is quite different to what the soldiers ate, but is strongly associated with war time. It has been said that the biscuits were sent to soldiers overseas by families and loved ones. They are also said to have been made and sold to support the war effort. It is an eggless, sweet biscuit made with rolled oats. At some stage after the War in the 1920s or 1930s, recipes started to include coconut as well.

Anzac Biscuits are easy to adapt for allergies because they don’t use any egg.

There are lots of gluten and dairy free ANZAC biscuit recipes circulating. Some of these claim to be ‘healthy’ and make all sorts of substitutes with coconut oil, sugar substitutes like maple syrup, whole wheat flour and other ingredients. Somehow it doesn’t seem right to tinker with a traditional recipe like this. They aren’t meant to be healthy or low in sugar.

Gluten free Anzac biscuits aren’t as clear cut. In Australia, oats can’t be labelled gluten free, as they may contain gluten due to interaction with wheat and other gluten containing grains during growing, harvesting and processing. You can read more about oats and gluten at Coeliac Australia. But if you are overseas, you will be able to find oats that are labelled as gluten free, like Bob’s Red Mill brand. You should also use a gluten free baking powder.

As we don’t have to avoid gluten, we just used normal Uncle Toby’s rolled oats. These do have a “may contain” warning for lupin.

What exactly is golden syrup?

Here in Australia we can buy delicious CSR golden syrup in a handy squeezy bottle from the shops. It’s a sugar syrup made when refining cane sugar. Another name for golden syrup is light treacle. I was surprised to learn from a friend living overseas that golden syrup isn’t available everywhere. Thank goodness for online shopping, so you can pick up some English Lyle’s golden syrup if you don’t live in Australia or the UK.

Traditional Anzac biscuits really should be made with golden syrup. But if you can’t get hold of any, you could substitute honey or rice syrup (which are a similar consistency) or even maple syrup (although it is runnier).

Preheat the oven to 160C (320F) and line baking trays with baking paper or non-stick sheets.

Place the oats, coconut, sugar and flour in a large bowl and mix the dry ingredients well.

Melt the dairy free spread and golden syrup in a small saucepan and stir until well combined.

Dissolve the bicarb soda (baking soda) in the boiling water and add it to the melted ingredients. The dairy free spread and goden syrup mixture will become frothy.

Add the melted mixture to the dry ingredients and combine.

Roll teaspoons of the mixture and place on the prepared baking trays. Flatten slightly with the base of a glass or a fork. Leave some room between the biscuits for spreading.

Bake in the oven for about 10 minutes or until golden brown.

Allow to cool on the trays before transferring to a wire rack to cool thoroughly – or to be eaten by your family straight off the rack while they are still warm and soft on the inside!

I never have leftovers for long, but you can store these dairy free Anzac biscuits in an air tight container for several days.

For more of our allergy-friendly recipes, including our “not peanut butter” peanut butter tasting cookies, be sure to have a look at our recipe page. 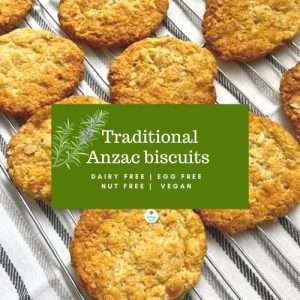 Sharing practical tips for living well with allergies - with a dash of real life experience. Find out more on our About page.